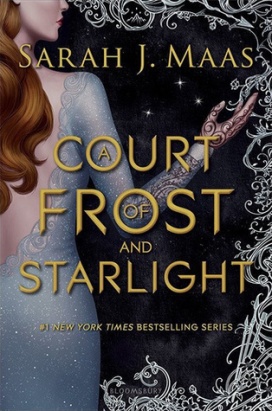 Title: A Court of Frost and Starlight

Published by: Bloomsbury YA

Feyre, Rhys, and their close-knit circle of friends are still busy rebuilding the Night Court and the vastly-changed world beyond. But Winter Solstice is finally near, and with it, a hard-earned reprieve.

Yet even the festive atmosphere can’t keep the shadows of the past from looming. As Feyre navigates her first Winter Solstice as High Lady, she finds that those dearest to her have more wounds than she anticipated–scars that will have far-reaching impact on the future of their Court.

A Court of Frost and Starlight is the first of three novellas set in the ACOTAR world and it picks up in the aftermath of ACOWAR, just a few months after the battle, and focuses on how everyone in the Inner Circle is dealing.

Maas announced that each novella would be centered around three different couples or ships, so it’s no surprise the first one is about Rhys and Feyre, although we do get other characters’ POVs here and there.

“The first snow of winter had begun whipping through Velaris an hour earlier.”

This book leads up to Winter Solstice, which is basically Velaris’ version of Christmastime. I love that despite this book’s heavy and serious tone (because it deals with depression, loss and trauma), Maas still managed to make it feel fun and sweet, weaving into the story that magical feeling present in every holiday story.

Each POV provides the reader deeper insight into who each character is, and in the scenes where the Inner Circle were all together I could not contain my grin. In all the books I’ve read, I have never felt such a fun and easy dynamic between a group of characters. They really are a perfect example of the reality that family is not always blood, sometimes it’s people we choose.

“I will never stop being grateful to have you in my life, either, Feyre darling. And no matter what lies ahead”–a small, joyous smile at that–“we will face it together. Enjoy every moment of it together.”

The romance between Rhys and Feyre is as perfect as ever and we get to see once again a more playful side to their relationship, as opposed to the more serious tone we saw in ACOWAR. I also felt like there was some sense of closure for their love story.

One other thing I thought was incredible about this novella is the awareness it brings to Art Therapy. As an artist, and a survivor, Feyre finds healing through her painting and decides to help others express themselves through art too, as a means of dealing with their trauma.

“Cassian had named about two dozen poses for Nesta at this point. Ranging from I Will Eat Your Eyes for Breakfast to I Don’t Want Cassian to Know I’m Reading Smut. The latter was his particular favorite.”

In a preview included of the next novella, it is clearly implied that we will be seeing A LOT more of Nesta and Cassian, which, let me tell you, is bound to be an emotional rollercoaster ride because those two have got plenty to figure out.

Have you read this novella? What were your thoughts? Who is your favorite Inner Circle character?

See you in the comments,

6 thoughts on “Book Review: A Court of Frost and Starlight by Sarah J. Maas”